The definition of a State Owned Enterprise or BUMN itself is a national body which can be a Persero or Perum.

Further information can be found in this article, including Perum or Persero.

You can also answer specific subject-related questions such as: Read this article

Types, characteristics and definitions of State-Owned Enterprises (BUMN) are as follows:

You must first understand what the characteristics of BUMN imply before you discuss.

The definition of BUMN according to Law Number 19 of 2003 is a business entity whose capital is wholly or mostly owned by the State through direct interest from differentiated state assets.

SOEs can also become non-profit companies to serve the community with products or services.

Since 2001, all SOEs have been managed by the Ministry of SOEs, led by a Minister of SOEs.

Many individuals wish to be able to work in various businesses among various types of organizations because of the many advantages, especially in terms of career paths, that can be obtained if we successfully join one of the companies.

In fact, BUMN is the target of many job seekers.

However, there are still a few of these job seekers who still do not fully understand the complexities of SOEs.

In fact, it is important for everyone to understand the types and characteristics of SOEs so that they can properly target the types of SOEs that suit our goals.

It should be noted that SEE is an important asset for the State of Indonesia, because the company's national income will go into the State Treasury for the purposes of paying state debt, administrative payments, and completeness at the time of export and import or international cooperation with other countries. .

We might assume that if the state does not have SOEs, the state will suffer huge losses, and debts will pile up and the main consequence will be that the country's economic system will not function.

The following are the types of State-Owned Enterprises (BUMN):

Persero is one type of BUMN whose capital is shared by the state and part of the capital.

This company was founded with the aim of making a profit (profit motive).

The status of the company is a legal entity and is allowed to work with private parties.

Currently, almost all state-owned enterprises are corporations. This is also one of the easily recognized characteristics of SOEs.

A public company is a type of BUMN in the form of a state company that is responsible for production, distribution and consumption for the benefit of the wider community. 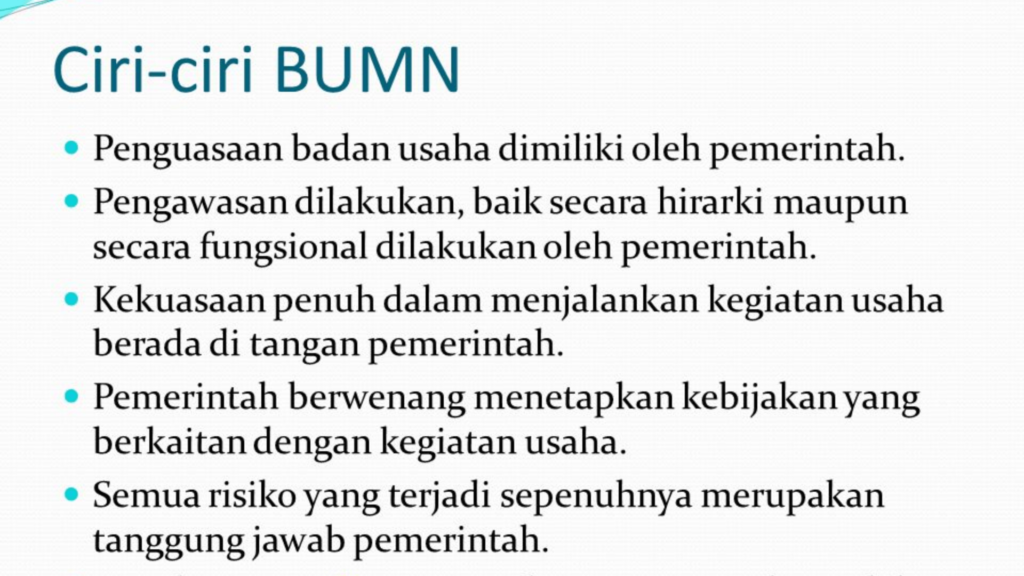 Full power in the hands of the government

The first feature when talking about SOEs is that all activities are regulated by the government, fully supervised and supervised.

Because they want to maintain stability and prevent irresponsible parties from diverting.

The existence of SOEs means that the State receives a steady income from the services and supplies it provides to the population.

The products appeal to all ages

Another characteristic that distinguishes SOEs from other businesses is that what is supplied and exchanged is a product that is in great demand and is needed by the community.

It can also be said that when there are no SOE goods, people are confused and don't know where to go.

Shares can be owned by the Public

It is not only the state that has the authority to regulate this for the issuance of shares in BUMN. One of the characteristics of BUMN is that parties other than the state also have the right to own shares in BUMN

However, it needs to be emphasized that the restriction on share ownership only applies to outsiders: no more than 50% of shares owned by a BUMN.

This is the meaning of BUMN, its types and characteristics. In running a BUMN company, financial accounts are one of the most important items to have, both in Perum Persero and in the private sector.

You will get many benefits with the right financial reports, such as an easy and accurate company plan.

State-Owned Enterprises or better known as BUMN is a term that we are familiar with. SOEs are controlled, monitored and fully supervised by the government. A public company is one type of BUMN in the form of a state company.

What is supplied and exchanged are products that are in high demand and are needed by society. There are restrictions on share ownership for outsiders: no more than 50% of shares owned by BUMN.